Costa Rica leads the world as the ideal biodiversity getaway. Nestled between two oceans are stunning rainforests and incredible volcanoes to create the adventure of a lifetime.

The coastlines are filled with 300 white-sand beaches, many of which are turtle nesting sites. Of course, the temperature is beach-perfect the entire year and attracts surfers from around the world. The rainforest contains one of the most diverse wildlife in the world.

The Central American country of Costa Rica is situated between Nicaragua and Panama. Its 185-mile coastline borders the Caribbean Sea and the Pacific Ocean. It is a small country, barely the size of West Virginia, with San Jose serving as its capital. Its major topography are two mountain ranges, the Cordillera Volcanica and the Cordillera de Talamanca. Its extremely fertile volcanic soil has made it one of the world’s leading coffee, banana, and pineapple producers.

Costa Rica has a voluminous pre-Columbian history. When Columbus reached the country in 1502, he called it the “rich coast.” The locals offered the Europeans gold, jewels, impressive relics, art, and the product of their fertile soil, mostly coffee. Much of these treasures can still be found in San Jose’s Pre-Columbian Gold Museum. According to a journal entry by Columbus, he saw, “more gold in the first two days than I saw in Spain in four years.”

Pre-Columbian tribes occupied Costa Rica for possibly 8,000 years. Agriculture and hunting allowed for the good life. As word of its riches spread, Spain’s King Ferdinand wasted no time in colonizing Costa Rica. Spain began to import slaves to work the land, but there were few plantations. The few slaves that were brought over mostly autonomously worked smaller farms with the white owners. While slavery existed, it never took firm roots in this country. The governor of Costa Rica himself was forced to plant a garden to be able to eat. Most slaves were soon freed, and slavery was officially abandoned in 1822.

Spain soon realized that Costa Ricans were not willing to submit easily. By 1821, the country was freed of the Spaniards, but the Spanish influence still survives. As Spanish power diminished, Costa Rica saw a huge influx of Jamaican immigration that helped build the Costa Rican railroad that was needed to transport the coffee crop from the inland to the coast.

The official language in Costa Rica is Spanish. There is also a creole dialect derived from the indigenous tribes. Most tourist areas can communicate in both Spanish and English. On the Caribbean Coast, which is inhabited by Jamaican descendants, English is the primary language, usually spoken with an accent.

The local currency is the colon/colones.  The US dollar is also accepted in most places. Note that Euros are not accepted in Costa Rica. It is recommended that visitors carry some local cash for small impulse purchases, such as a soda or snacks.

Things to Do in Costa Rica

Costa Rica has a wonderfully diverse landscape, from tropical beaches to lush greenery, to live volcanos. Whether visitors wish to laze on the beach or explore the rainforest, there is always something to do.

The Nicoya Peninsula has some of the best beaches and most breathtaking sunsets in Costa Rica. Nosara Beach has blue, clear water and is beloved by surfers. The small town on Mal Pais is a favorite place to stay on the peninsula. Check out the turtle beaches and various cave systems.

Rising slothsto 5,000 feet, the impressive Arenal volcano is visible from a great distance. It is an active volcano, with visitors traveling from far away to catch sight of the molten lava gushing down its sides. The best time to see the volcano (without fog) is from February through April. A guide to explain the history of the volcano and the local flora is highly recommended.

While in Arenal Volcano National Park, savor the waterfalls and skin-soothing hot springs.

Corcovado National Park in southern Costa Rica has been referred to as the “most biodiverse place on earth” by National Geographic Magazine. The elevation begins at sea level and stretches to 2,444 feet. In-between, visitors will find a rainforest, a beach with coral reef, mangroves, and a river.

Several hiking trails take them around the park to view the various monkeys (capuchin, squirrel, howler, and spider), sloths, pumas, jaguars, and many others. Look for sea turtles, egrets, crocodiles, and frogs by the beach, which also serves as the annual breeding grounds for humpback whales. Above it all, a large bird population keeps watch. The best way to see the park is with a tour. Accommodations are available in Drake Bay and Puerto Jimenez.

Puerto Viejo de Talamanca is a small town with a big attitude and serves as a popular tourist destination. The fabulous beaches dominate here, and the beaches are dominated by a wide array of restaurants and bars. The Playa Negra beach is a great beach with black sand, while the Playa Cocles Beach is beloved for its surfing. For plain loafing on white sand, the Playa Punta Uva is highly recommended.

Locals and visitors enjoy exploring Puerto Viejo on horseback or by bicycle. Both are great for seeing the rainforest and for finding the best beach.

The Jaguar Rescue Center in Puerto Viejo was created for the preservation of all wildlife (not just jaguars) in the region. It rescues and houses approximately 800 animals annually that require 24/7 care and rehabilitation before being released.

Guides at the Center educate visitors about the injured animals and the plans for release.

While in Puerto Viejo enjoy a meal and a cocktail at its popular waterfront restaurant, KOKi Beach. They have excellent steaks and seafood.

Costa Rica has extremely diversified regions. From stunning beaches to rainforest jungle, visitors here can savor the best landscapes and most different types of cultures.

The Pacific coast is known for its miles of stunning shoreline.

This is a small costal town on the marvelous Nicoya Peninsula is visited by surfers from throughout the world. The dirt road leading to Santa Teresa has a variety of restaurants, surf shops, yoga retreats, and luxury resorts.

For budget travelers, the Lost Boyz hostel offers good, clean accommodations with plenty of fellow surfers. For that touch of luxury, there is the Akwa Resorts, complete with bungalows, villas, and an ocean setting.

Forbes Magazine called Manuel Antonio National Park the “most beautiful national park in the world.” It has everything for the ideal getaway – fantastic beaches with corals, sponges, and crabs that are perfect for snorkeling.

There are clear trails through the rainforest, where the monkeys are the main attraction as they beg for (demand) food (they should not be fed).

The park is home to 350 different species of birds, from the brown pelicans, kingfishers, toucans, and many others. True birdwatchers should tour with a guide who can help them spot the rarer species of birds.

Go from the national park for some great snorkeling on Cano Island. The two-hour guided tour consists of an abundance of local marine life, such as dolphins, barracudas, sharks, and others. Guests can wander the island and enjoy some of the pre-Colombian artifact exhibits.

Tortuguero National Park is a bit rainy, but it’s the place to float down the canals and rivers on a guided tour and catch the local wildlife, plants, and some endangered species such as the jaguars and a few rare sea turtles. This coast has a variety of large turtles, such as the Green, Leatherback, Hawksbill, and Loggerhead who come here between March and October to nest their eggs. For those who are unaware, the Leatherback is a giant who weighs in at 1,500 lbs. The busiest months for nesting turtles are April and May.

Visit the refuge for its great hiking trails and many animals, especially monkeys and birds. The best way to explore might be by boat. The landscape here is quite untouched; it is in a very remote location and can be reached only by boat or plane. Fishermen come here for the great haul, and deep-sea fishers can angle some marlin and tuna.

The Best All-Inclusive Hotel or Resort in Costa Rica

Hotel Riu is located by the Pacific’s Guanacaste which is known for its fabulous surfing. Here, guests will find great watersports, windsurfing, kayaking, snorkeling, as well as a challenging round of golf. The hotel is within exploring distance of a volcano.

The meals are all-inclusive, so guest work their way through the menus. To revive body and soul, slip into the Renova Spa for a sauna, massage, and treatment options. Children love splashing in the waterpark on the property.

The Hotel Riu has been awarded the Gold Certification for the Travelife Sustainability System.

Best Resort or Hotel for Couples in Costa Rica

The Punta Islita Guanacaste hotel by Samara Beach provides an unforgettable romantic experience. The hotel’s individual villas with pools are spread throughout the property have a stunning vista with the promise of privacy and luxury.

Two restaurants with an ocean view offer casual and fresh seafood cuisine. For a special dinner, indulge in a torch-lit or a sunset dinner on the beach.

Couples can stroll through the jungle or relax by the pool in absolute privacy.

Best Resort or Hotel for Families in Costa Rica

The Volcano Lodge near La Fortuna has a stunning view of the Arena Volcano in the middle of the rainforest. Guests here find seclusion and a wide range of family-oriented activities. Each room has its own private terrace and view of the mighty volcano. There is a restaurant and two bars.

Visitors can indulge in one of the three hot springs pools with soothing vapors that are available to only guests. This is the ultimate relaxation, with one pool offering a swim-up bar and quiet music.

The children can play freely in the lodge’s playground while the entire family will love floating through the jungle down the Sarapiqui River. 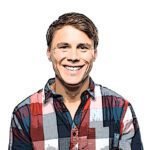 Sam is the founder of EpicCaribbean.com and is a native of Florida. Sam loves the Caribbean with all his heart and wants to share it with everyone he can. He has been traveling in the Caribbean since he was just 18 months old and has seen most of its beautiful beaches and turquoise waters.